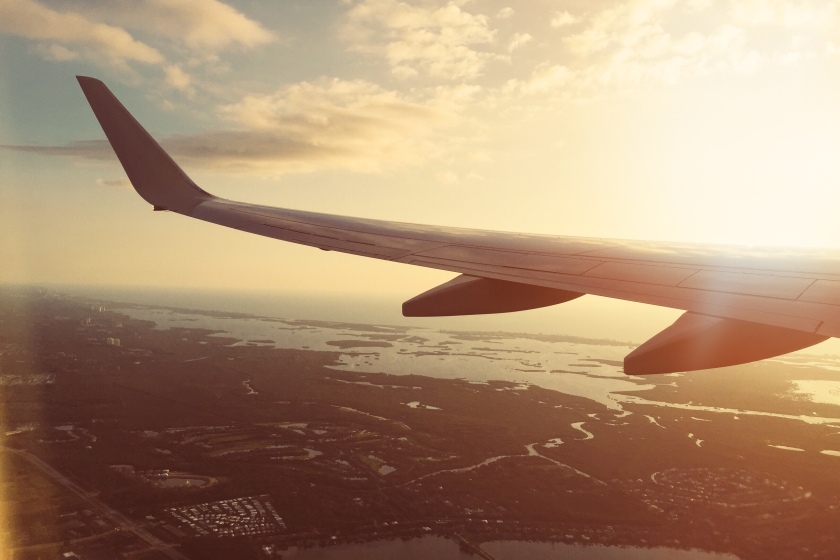 I’ll start with airports. They’re either a beautiful cacophony of global humanity, or the absolute bane of my existence, depending only on if I’m running late or not. And I’m usually always running late, especially if I’m traveling alone which, these days, I am more than I am not.

I don’t enjoy flying on planes. The very concept, when boiled down and written on paper sounds just dreadful to me. I still don’t fully understand exactly how it is that planes stay in the sky, (despite many people trying their best to explain to me the rationale of aeronautical engineering). And while I know I could easily answer all of my own questions with a Google search, I remain steadfast in my ignorance and dignify my aversion by saying that I can’t appreciate something I don’t fully understand.

To me, flying on a plane is a complete surrendering of all control to a large corporation whose job it is to get you from point A to point B on time, and without crashing to your death. Yes, but don’t you surrender the same control when on a bus or a train, you might think? Sure, I guess. But if things start to go south, you can yell and scream for the driver to pull the bus over, or to get off the train at its next stop, or worst case scenario, roll off into a gully and run for your life. On a plane, the luxury of escaping is surrendered as you cross the aircraft’s threshold and are greeted by the flight attendant.

I guess the bottom line of my whole argument here is this: Human beings, flying in mass quantities on airplanes is not a natural, sense-making, or wholly comforting idea. But then again, neither is putting a man on the moon and that still didn’t stop us as a society from seeing that it happened anyway.

But one of the most abhorrent elements of airplane travel is the very obvious reminder of an entrenched, air-bound class system that you’re forced to endure every time you walk through business class to get to your seat in economy. Unless, of course, you’re one of the illustrious chosen few that is already seated in business class, feet up with a champagne flute in hand. It’s a direct confrontation of the proletariat and the semi-bourgeois, with the real creme de la creme of first class cordoned off from the general public completely, leaving you to wonder what luxuries are being bestowed upon them, away from view, as you schlep your carry on luggage past a woman with an ass the size of Michigan who just doesn’t seem to know which seat is J and which is K.

To offset this reminder of your plebeian existence of forfeited elbow room and the amenity of a single hot washcloth, passengers are subdued by being preoccupied with a pre-flight dilemma that, while seemingly trivial, becomes the determination of whether your 12 hours in the sky will be effortless or dreadful. I am speaking of the eternal weighing of pros and cons, belaboring the only decision that you are permitted to still make, that eternal question—window or aisle?

You never choose the middle. Oh no, the middle is given to you. And always, as you find yourself cruising through online check-in prior to your departure, you scroll through the chart of available seats, weighing the pros and cons of each seat’s position with the strategy of a general—Do I have a quick layover which requires me to book it off the plane as fast as possible? Aisle, near the front. Is this an overnight flight home, where I will be in no particular rush to disembark the aircraft, but will be quite keen to pop any available sleep aid upon departure and sleep for 9 hours without interruptions? Opt for an empty row near the back.

You might ask a flight attendant if the plane is full, or if there are any open seats? If you’re lucky, once you hear the announcement that “cross-check is completed,” you’ll be able to find an empty row near the back, spread out and assertively claim your territory like this land grab that this is, and get ready for the best night’s sleep you could possibly have in a tin can, traveling in a jet stream full of strangers and professionals, who are doing their job of microwaving mass quantities of single serving meals mere centimeters behind where you aspire to sleep, as seat belt buckles dig into your hip bones and your travel pillow slowly cuts off your windpipe, and you slowly suffocate.

That is, until approximately an hour & a half before landing when the lights come on and, regardless of the actual time, breakfast is served, the smell of coffee rouses the sleeping, and the chirp of the flight attendants’ “Good morning! Tea? Coffee?” is, luckily for you, is a song that can easily wake the dead. If I can help it, I’ll avoid taking British Airways flights for this very reason. “Tea? Coffee?” Their flight attendants, and their accents, are like chirping birds—like Cockney Hadedas!– waking you from what semblance of a sleep you had finally managed to attach yourself to, from the upright, vertical position.

The first time I ever flew abroad I was 19 years old, flying from Boston to Amsterdam with 80 of my classmates for a semester abroad in the Netherlands. I ate my first weed cupcake right before going through security and I managed to sleep like a THC-induced zombie for the full 10 hours of the flight while playing “Holland, 1945” by Neutral Milk Hotel on repeat for the entirety of the flight. Thus, no real observations were gleaned from my maiden voyage across the Atlantic.

I’ve come to learn that in many parts of the world smoking in airports is a concept that is actually permitted, and that the obvious mark of a first-world airport is when it is not. I’ve seen grown men break down into tears, as if they had just learned that their brother had died, only to learn, upon inquiring, that their flight to Amsterdam had simply been delayed for four hours. I’ve seen young mothers have complete meltdowns with three small children screaming at their feet, only to see other mothers—strangers who had been watching—simply walk over and start tending to the children, helping the mother as if she were a part of the native matriarchal village to which they obviously all belonged.

True colors are revealed at boarding gates, and in security queues. It’s often not pretty, but then again, neither is the act of flying itself. While romantic in idea, it has become far too much trouble than its worth. An hour plane ride can cost you a good half of your day, when you consider the time it will take getting to the airport, the amount of hours you will have to arrive early, the time spent waiting-in security, at the gate, to get to your seat, on the tarmac, at the loading gate, to get off the plane, to collect your luggage, to find your ride home. When you empirically list the steps, the very concept seems not only laborious, but downright preposterous.

And still, I fly. Because traveling by cruise liner would take too long, and because trains can’t run over the ocean, and because my home is on one continent, and my current existence is on another. I fly because my work takes me to work in different countries and if I did not fly, I would not work, and that is an obviously unsustainable decision. I fly because, I know that the end, in the end, really does justify the means of falling asleep in one time zone and waking to “Tea? Coffee?” in another time zone, 6 hours behind when you closed your eyes. I fly because it is, in practice and in essence, a perfect encapsulation of human beings in mutually uncomfortable situations.

The true colors are revealed and I sit back, watching the behaviors of my fellow men and women reveal themselves in a more stunning drama than any in-flight movie I’ve ever half-watched while in a tin can full of strangers, flying through the clouds and above the sea.

I have far more opinions on the subject and perhaps I will another day but I’ve really got to jet, my flight is now boarding and now I’m running late again.

Stories of travels, of tribulations, and of learning to tell the difference. View All Posts